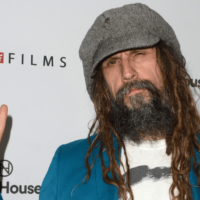 In a post on Instagram, Zombie writes, “Since Halloween is rapidly approaching I thought it was the perfect time to MEET THE MUNSTERS! Direct from the set in good old Hungary I present Herman, Lily and The Count sitting in front of the newly completed 1313 Mockingbird Lane.”

The reboot of “The Munsters’ doesn’t have an official release date, but rumors say that the film will have a day-and-date release both in theaters and on Peacock.